Cutting and pasting OR always check the source data

Normally this is because the infographic itself is misleading, but today I found an equally hideous incarnation of this.

It all started over at feministing.com, where I was greeted with this graph: 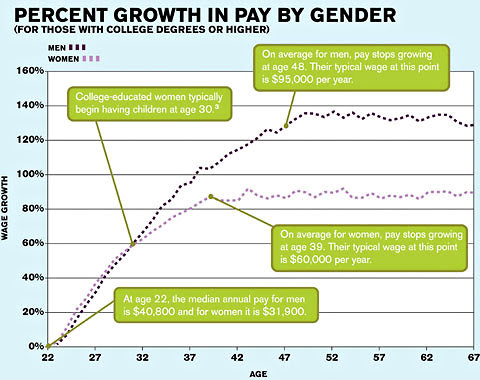 This pretty much set off my alarm bells immediately.  I had quite a few questions about all of this, as the graph obviously said very little about the methodology.  Who was included?  How did they account for gaps in years worked?  Most importantly, did they control for profession?

I clicked on the link provided, which took me to this blog post on the New York Times website.  It shows the same picture as above, with an intro of the following two sentences:

We’ve written before about how the gender pay gap grows with age. Generally speaking, the older a woman is, the wider the gap between what she earns and what her male counterpart earns.

I was struck by that phrase "male counterpart".  Were we really talking about counterparts here?  I was curious again about the profession question.  It struck me that many female dominated professions are actually "terminal" professions....i.e. the job you enter can remain pretty unchanged for years: teachers, nurses, therapists, etc.  On the other hand, many male dominate professions have far more steps on the ladder, which would be a pretty non-sexist explanation for the continued growth seen throughout the decades.

As it turns out, the profession issue was directly addressed on the original....but it was completely edited out in subsequent reprints.  Profession does have an effect on earnings growth, and the original captured that.  I'm a little concerned about how far this graphic went without all of the important qualifying information they took care to include.

Interestingly, the NYT columnist did actually write a more comprehensive article on the topic 2 years ago that she linked to in this article, but I'm surprised she didn't do a recap.  With the ease of transport of info on the web, I don't think the cut and paste job is an okay thing to do.  It sets up less diligent bloggers to merely reprint, and it undermines the original work.  Someone out there is quoting this right now, having no idea that they're missing 2/3rds of the information.