Life goes on, and so does life expectancy

Life expectancy is a funny thing.  It's a pretty often quoted statistic that not many people realize is just that - a statistic.  It's also fairly misunderstood, in that many people presume it's static.

Truthfully, your life expectancy changes over the course of your life based on how long you've already lived. Most people accept this as making sense once it's pointed out, but it's not often the first thought people have when they here it (and journalist's are ABYSMAL at clarifying the "at birth" part of most life expectancy estimates).  Anyway, this week chartporn.org posted this chart, which I think illustrates the changes nicely.  I didn't check all the other data they put on there (though I was surprised to see how low the median age for first divorces is), but I thought the overall affect was quite informative. 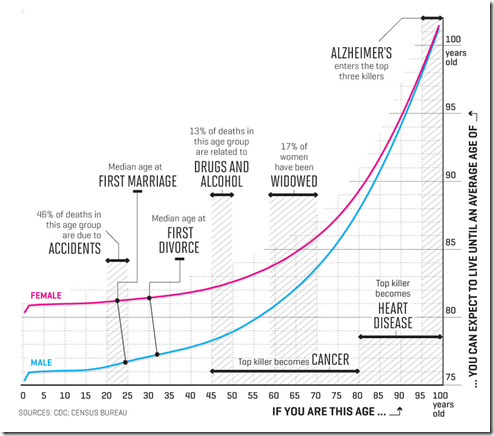 In particular, I like the beginning of the chart, where it shows that if you make it beyond your first year, you actually get a bump up pretty quickly.  Infant mortality is not often thought of as affecting overall life expectancy in developed countries, but it does.
Posted by bs king at 7:00 AM

Email ThisBlogThis!Share to TwitterShare to FacebookShare to Pinterest
Labels: Data for the pure love of data