I've used google ngram's a few times on this blog already, mostly for silly things, but this website has the best use of it I've seen so far.

He takes the scripts of Downton Abbey (WWI) and Mad Men (1960's) and feeds them through the ngram to find out which phrases are the most anachronistic.

I find the whole project pretty cool, because apparently he took the whole project on as a response to a few magazine articles about phrases that wouldn't have been said at the time.  It struck him that those phrases were just the ones that people could hear and think "hey, that sounds modern!", but no one was thinking through what phrases we might have gotten so used to we weren't even recognizing as out of place.

I've never seen Downton Abbey, and only seen an episode or two of Mad Men, but I still found it interesting what they got wrong.  The last episode of Mad Men apparently had an aspiring actress use the phrase "got a callback", which apparently was barely used in a theater context at the time (he cross references the OED).  He also makes pretty charts, which I loved (this one is for Downton Abbey): 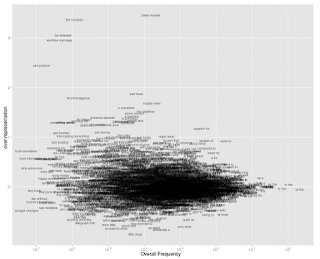 Email ThisBlogThis!Share to TwitterShare to FacebookShare to Pinterest
Labels: Just for fun, Links