Yesterday I posted about retractions in scientific journals, and the assertion that they are going up.  I actually woke up this morning thinking about that study, and wishing I could see more data on how it's changed year to year (yes, I'm a complete nerd...but what do you ponder while brushing your teeth????).  Anyway, that brought to mind a post I did a few weeks ago, on how conservatives trust in the scientific community has gone steadily down.

It occurred to me that if you superimposed the retraction rate of various journals over the trust in the scientific community rates, it could actually be an interesting picture.   It turns out PubMed actually has a retraction rate by year available here.  For purposes of this graph I figured that would be a representative enough sample.


I couldn't find the raw numbers for the original public trust study, so these are eyeballed from the original graph in blue, with the exact numbers from the PubMed database in green. 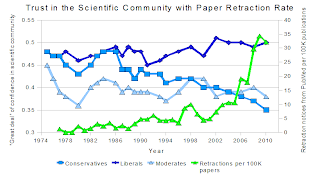 So it looks like a decreasing trust in the scientific community may actually be a rational thing*.

It's entirely possible, by the way, that the increased scrutiny of the internet led to the higher retraction rate...but that would still have given people more reasons not to blindly trust.  As the title of this post suggests, skepticism isn't crazy if you actually should be skeptical.

Speaking of trust, I obviously had to manipulate the axes a bit to get this all to fit.  Still not sure I got it quite right, but if anyone wants to check my work, the raw data for the retraction rate is here and the data for the public trust study is here.  These links are included earlier as well, just wanted to be thorough.

*Gringo requested that I run the correlation coefficients.  Conservatives r = -0.81 Liberals r = 0.52 Moderates r = 0.  I can't stand by these numbers since my data points were all estimates based on the original chart, but they should be about correct.
Posted by bs king at 4:44 PM

Email ThisBlogThis!Share to TwitterShare to FacebookShare to Pinterest
Labels: Correlation and Causation, Data for the pure love of data