Today I discovered that my favorite webcomic (xkcd.com) actually has a special comic up if you check it from my employer's server.  Turns out the artist's wife is a patient, doing well, and he wanted to show some love.  This post is thus titled for this shirt, which would make an awesome Christmas present for me, even in April.

Anyway, this weekend I saw this story with the headline "Study: Conservatives' Trust In Science At Record Low".

My first thought on seeing this was that the word "science" is a loaded word.  I mean, I'm as much a science geek as anyone.  Math's my favorite, but science will always be a close second.  But do I trust science? I'm not sure.  Something really bothered me about that question, but I couldn't quite put my finger on it until I read this post on the study from First Things today.

My love of science makes me a skeptic.  I makes me question relentlessly and then continuously revisit to figure what got left out.  I don't trust science because not trusting your assumptions is science done right.  If we could all trust our assumptions, what would we need science for?  This is the problem with vague questions and loaded words.  Much like the discussion in the comments section of this post where several commenters weighed in on the word "delegate" in relation to household tasks, it's clear that people will interpret the phrase "trust science" in many different ways.

Some might say it means the scientific method, scientists, science as a career, science's role in the world, or something else not springing to mind.  Given the vagueness of the question though, I would have a hard time actually calling anyone's interpretation wrong.  Mine is based on my own bias, but I would wager everyone's is.  So isn't this survey more about how we're defining a phrase than about anything else?

I thought my annoyance was going to end there, I really did.

Then I looked at the graph with the story, and had no choice but to get annoyed all over again. 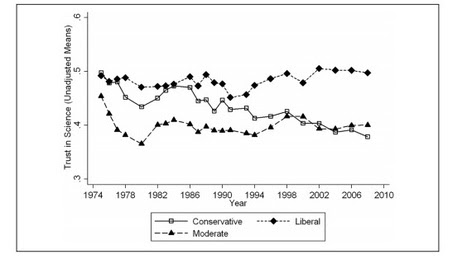 That's what I get for just reading headlines.

So over the course of this survey, moderates have consistently trusted science less than conservatives for all but four data points?  Why didn't this get mentioned?  I found the original study and took a quick look for the breakdown: 34% self identified as conservative, 39% as moderate, and 27% as liberal.  So 73% of the population has shown a significant drop off in "trust of science" and yet they're somehow portrayed as the outliers?  Science and technology have changed almost unimaginably since 1974, and yet liberal's opinions about all that haven't changed*?  Does that strike anyone else as the more salient feature here?

*Technically this may not be true.  I don't know what the self identified proportions were in 1974, so it could be a self-identification shift.  Still.  This might be that media bias everyone's always talking about.
Posted by bs king at 7:48 PM

Email ThisBlogThis!Share to TwitterShare to FacebookShare to Pinterest
Labels: Questioning the Questioners