More thoughts on the soda ban

Yesterday I found out the soda ban is potentially hitting a bit closer to home.

For those of you not familiar with Cambridge, MA, it's affectionately known as "The People's Republic" (and even has a communist bar of the same name).  Thus the proposed ban was pretty unsurprising.

Coincidentally, Ben Goldacre put up a new post yesterday publicizing a paper he coauthored to try to push governments in the UK to actually conduct trials of their policies before implementing them.


We also show that policy people need to have a little humility, and accept that they don’t necessarily know if their great new idea really will achieve its stated objectives. We do this using examples of policies which should have been great in principle, but turned out to be actively harmful when they were finally tested.

Contrast this to the Mayor of Cambridge's statement on the soda ban:


"As much free will as you can have in a society is a good idea," Davis said Tuesday. "... But with a public health issue, you look at those things that are dangerous for people, that need government regulation."

Is no one interested in finding out if this idea will actually work before implementing it?  The leading researchers in the field seem to think it won't.   I tend to agree with them.  You know what though?  I'm game.  Let's put it to a randomized trial.  There are those who think the constitutionality of this should be worked out first, but I think a well run trial could open the door for an opt in system rather than a mandatory one.

Hey, maybe if politicians stayed a little more open to testing their ideas, you wouldn't wind up with cartoons like this one: 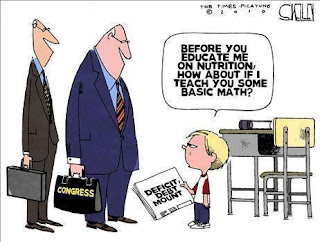