Some infographic love for my little brother

My wonderfully liberal little brother is having a rough week, so I thought I'd cheer him up in the best way I know how....by criticizing a Republican infographic.

He sent me this one this morning, and while it's a little sparse, the bottom right hand corner caught my eye:

Now, I have no idea how much was given to Solyndra, or how many jobs wind energy has left, but I do know a thing or two about gas prices and infographic figures.

I pulled out the ruler when I cropped the photo, and confirmed my suspicions.  The larger pump in the picture doubles both the height and the width of the first pump.  That's not twice as big....that's four times as big.  I'm sure they'd defend it by pointing to the dashed lines in the background and saying only the height was supposed to be reflective, but it's still deceptive.  Curious what a gas pump actually twice as big would look like?  Here you go....original low price on the left, original "double" price on the right, actual double in the middle.

Graphics aside, let's look at the numbers.

2009 was just not that long ago, and I know that $1.85 was quite the anomalous price at the time.  I've seen that stat more than once recently, and I have been annoyed by it every time.  Tonight, I decided to check my memory on it, and see if that dip really was the aberration I remember it being.  Don't remember either?  Here's the graph of average gas prices since 1978, per the BLS generator: 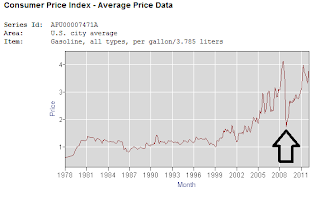 You can see this a bit better if you isolate George W Bush's presidency: 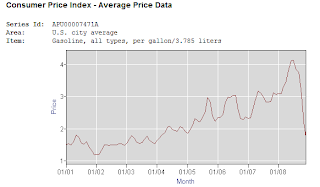 Now, you could accurately say that George Bush took office with gas prices at $1.53 and left with them at $1.74....but clearly that would ignore a whole lot of data in between.

Now here's the averages and standard deviations for each term of the presidencies:

Now, none of this adjusted for inflation.  By adjusting the yearly averages to 2010 dollars, I got the second term of GWB to $2.99, and the current term for BHO to $3.00.