...and now for something completely different.

I don't normally get that involved with sports statistics, if only because it's the one place in the stats world where you could study them for an hour every day and still be barely a rookie.  However, something awfully strange is happening in my house recently, and I feel it's worth mentioning:  the Orioles are leading the AL East (in fact the whole American League), and the Red Sox are last.

Now, this is particularly interesting to my household, as my husband happens to be a lifelong Orioles fan.  I on the other hand, have always been a Red Sox fan.  Since we met almost 6 years ago, this has pretty much meant that I have had exclusive bragging rights when it came to baseball.  I know it's not even a quarter of the way in to the season, but this is the longest we've gone so far, and it's surreal.

Yesterday, Grantland put up an article on the Orioles under .500 curse.  Apparently they have not finished over .500 since 1997....more than enough seasons for the baseball stats guys to go nuts with.  I was curious exactly how bad it was, so I looked around until I found this graph generator*.

For those of you who don't know much about the Orioles, here's what they've looked like since 1998 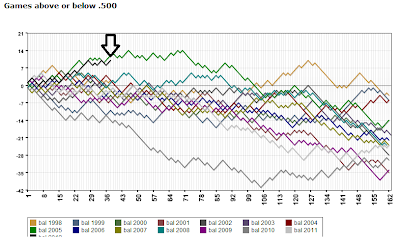 Yowza.  Even if this season doesn't hang in there, it's still the most encouraging thing to happen in 7 years or so.

Now, here's the Red Sox in the same time period: 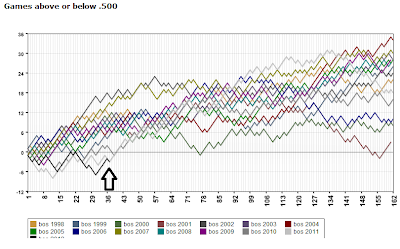 Yikes.  If they don't pick it up soon this will be the worst they've started off in 15 years.

Sweetly enough, if the Sox win tonight against the Rays, that will both increase the Oriole's lead in the AL East, and look good for the Red Sox.

*If it shows you how crazy sports stats people are, I found that graph generator in exactly one try on google.  Conversely, when I tried to find historic gas prices for this post, I searched for almost half an hour trying to find an official source for anything pre-1978.  Didn't happen.

Email ThisBlogThis!Share to TwitterShare to FacebookShare to Pinterest
Labels: Data for the pure love of data, Just for fun